Please note: This an educational resource for the purposes of explaining how Uniswap works.

Since launching in 2018, Uniswap has gained prominence as a popular decentralized exchange (DEX) and automated market maker (AMM). Since these are fairly complex topics, we thought it’d be helpful to dedicate some time to explain what they mean and how Uniswap works.

In this article, I will both introduce you to Uniswap and guide you through the process of porting Uniswap V2 to the Moonbase Alpha TestNet (as an example, not for ongoing use). It is divided into three main sections/topics:

I have also posted a walkthrough of how to port an example application like Uniswap v2 to Moonbase Alpha or a Moonbeam standalone node. I’ll update this post with the link when it’s live. There is also an ERC20 token faucet on Moonbase Alpha that you might need.

The Basics of a Market Maker

Before we dive into Uniswap, it is important to understand what a Market Maker is.

Broadly speaking, market makers (MM) provide liquidity to the exchange they operate in, and they set “buy” and “sell” quotes for each asset. Therefore, they are the “source” of price discovery for trades. If a trader’s bid matches the offer of the MM, the trade is executed. Market maker’s earnings are usually tied to the spread, that is, the difference between their “buy” and “sell” prices. As the spread increases, the more they earn per trade executed.

Uniswap is an automated market maker (AMM) protocol that relies on a series of smart contracts on top of Ethereum that automates this price matching (or price discovery) process. It allows its users to swap one token for another by interacting directly with the smart contracts, no intermediaries needed. Tokens need to be ERC20 compliant or Eth (wrapped as an ERC20 with the WETH contract).

Liquidity providers (LP) can create these markets (called pools) by deploying them using the Uniswap factory contract. Once a pool is created, anyone in the ecosystem can provide liquidity to it. Liquidity providers earn a flat percentage fee according to their stake in the pool’s total liquidity. Shares of the pooled liquidity are accounted for using a liquidity token, commonly known as an LP token. You can think of each LP token as a share unit in the pool.

Automated market-making means that prices are set according to a mathematical formula and not by intermediaries. In the case of Uniswap, it relies on the XYK model, which uses the following equation:

Let’s go through a practical example. A pool was created with 1000 units of Token X and 1000 units of Token Y. That means that, for this example, k equals 1,000,000, and the initial price ratio between tokens is 1:1. Remember that k will remain constant. Consequently, if a user wants to deposit 10 Token X, the new amount of Token Y the pool needs to have can be calculated as:

This means that there is a surplus of 9.9 Token Y to keep the pool balanced (k constant). This is sent to the user who deposited the 10 Token X, which got a price of 0.99 Token Y per Token X. Therefore, the following table can be constructed (note that trading fees are not included):

From the table, it is clear that the higher the amount of tokens being traded, the lower the unit price is. The deviation from the ideal ratio (or price, which is 1:1 in this example) is part of the price discovery provided by an AMM.

But wait, how does this formula provide automated market-making? Remember that the math gives the price of the trade, and this creates arbitrage opportunities. Users can take advantage of imbalances in the Token X/Token Y ratio to get one of the tokens at a discount. This should always keep the pools balanced in an “automated” fashion.

And that is the basics of Uniswap. The protocol was publicly announced and launched to Ethereum MainNet in November 2018. Since then, it has grown to become the biggest DeFi project in the blockchain world. Uniswap had 130 billion dollars of all-time volume at the time of writing, with 4.56 Billion dollars of liquidity and a 24 hours volume of 1.28 billion dollars. All those numbers are in billions, with a “b.” It is crazy to think about the amount of money being locked in lines of codes. This shows the true potential of combining smart contracts, blockchain, and finance.

How to Use Uniswap

As mentioned before, Uniswap relies on a series of smart contracts which define its automated market-making protocol. This section provides a brief overview of the main contracts that are part of the protocol.

The Uniswap V2 factory contract is arguably the core contract of the protocol. Its primary purpose is to create pools (called pairs in the contract). To do so, it uses the create2 opcode, which is capable of deploying contracts with deterministic addresses. This is useful to calculate the address of the pool of a pair of tokens (even off-chain). You can read more about create2 in this article. In short, to determine the address of the new pool (contract) to be deployed, create2 uses:

The pool creation occurs in the following lines of the createPair function:

The router is the smart contract used to interact with a pool. Routers are stateless, meaning they don’t hold token balances. Therefore, they can be replaced safely and in a trustless way for a more efficient router in the future. For example, the current router (02) is an upgrade from the first iteration (01).

This document won’t detail the code for all the functions inside the router contract. However, some of the essential functions to consider are:

Each of the functions listed above also have a similar alternative but for pools where one of the assets is ETH (wrapped as WETH). In such cases, the user will send ETH, and the contract will handle the interaction with the WETH smart contract, either for minting, burning, or transferring tokens.

To illustrate the deployment of Ethereum-based applications to Moonbeam, and in the process of creating a tutorial describing it, we deployed an example instance of Uniswap to Moonbase Alpha, the Moonbeam TestNet.

Bringing Uniswap V2 to Moonbeam was a three-step task: deploying the contracts, adapting the interface, and modifying the SDK. Deploying the contracts was super straightforward. Nothing needed to be modified at a protocol level. However, due to the create2 opcode (see earlier explanation) and not Moonbeam itself, a minor change needed to be made (more details in this blog post).

The interface and SDK were adapted to add support for the corresponding chain IDs of a Moonbeam standalone node and the Moonbase Alpha TestNet. Also, the new contract addresses needed to be included in the code.

If “Moonbeam-swap” is connected to the correct network (standalone node in this case) via MetaMask, you should see the following screen: 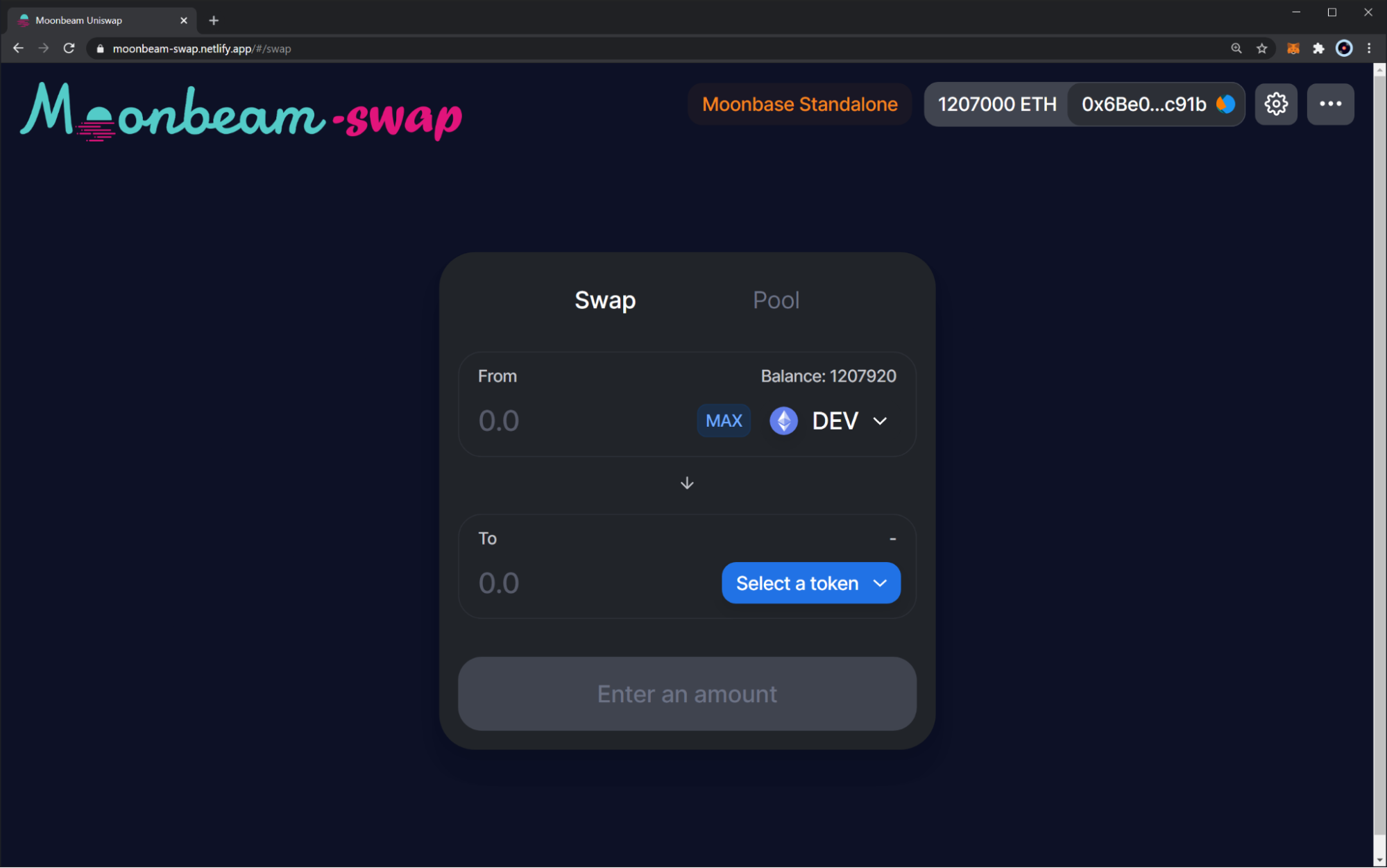 If you’ve used the classic Uniswap V2 interface, this should feel familiar. From here, we can swap tokens, create pools, and add/remove liquidity from existing pools. In this case, let’s start a new pool of two ERC20 tokens: Token1 and Token2 (not super original names, I know).

To do so, go to the “Pool” menu and click on the “Add Liquidity” button. Here, you can select a list of default tokens (a list for the standalone node). If your token is not listed, you can add it by pasting its address on the search bar at the top. 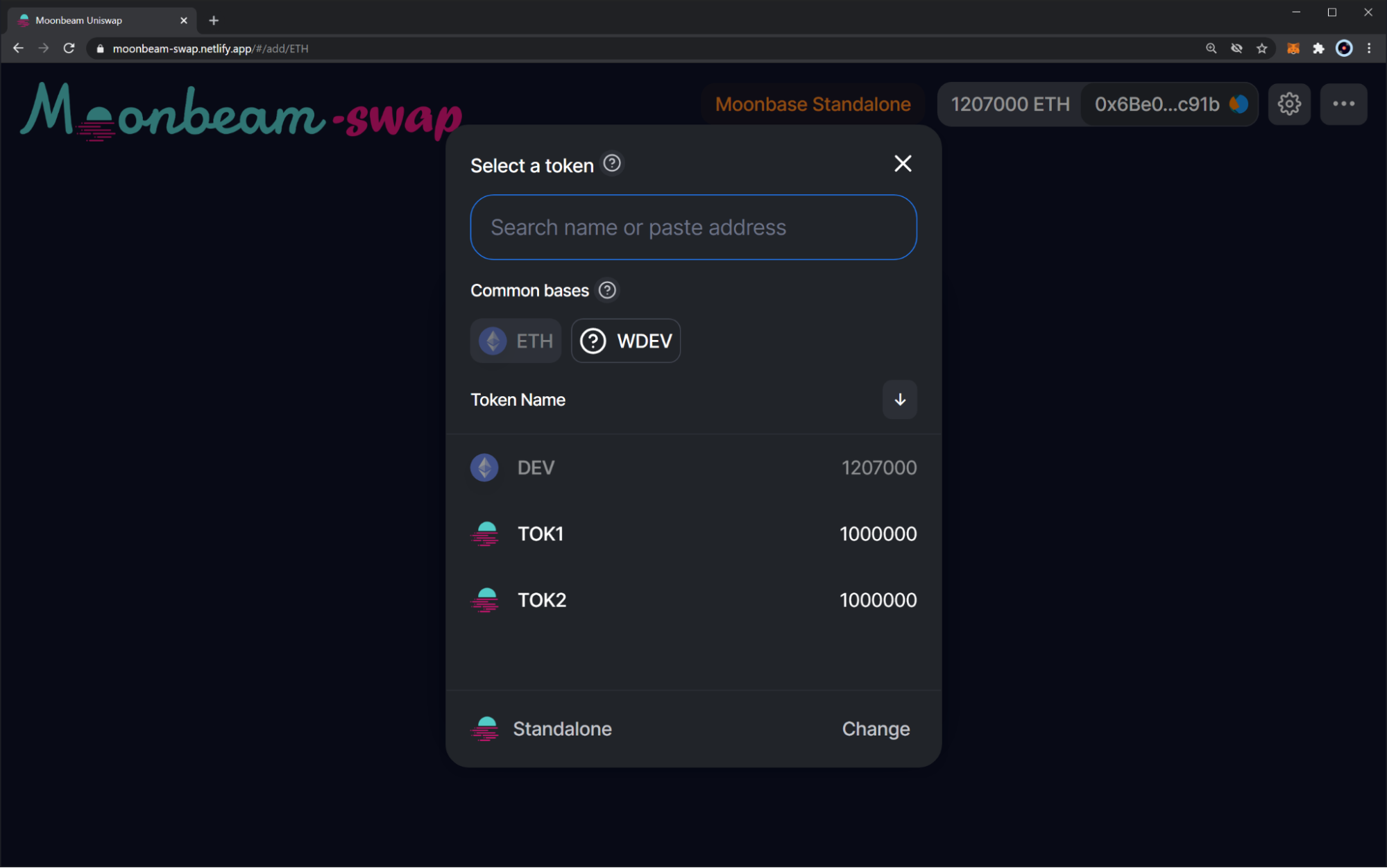 Once you’ve selected the Tokens that will make up the pool, enter the number of tokens you want to provide as initial liquidity (remember that this sets the price).

Next, you need to approve the Router V2 as a spender for your ERC20 tokens. This is done via a transaction when you click on the “Approve” button for each token. Transactions are signed with MetaMask. 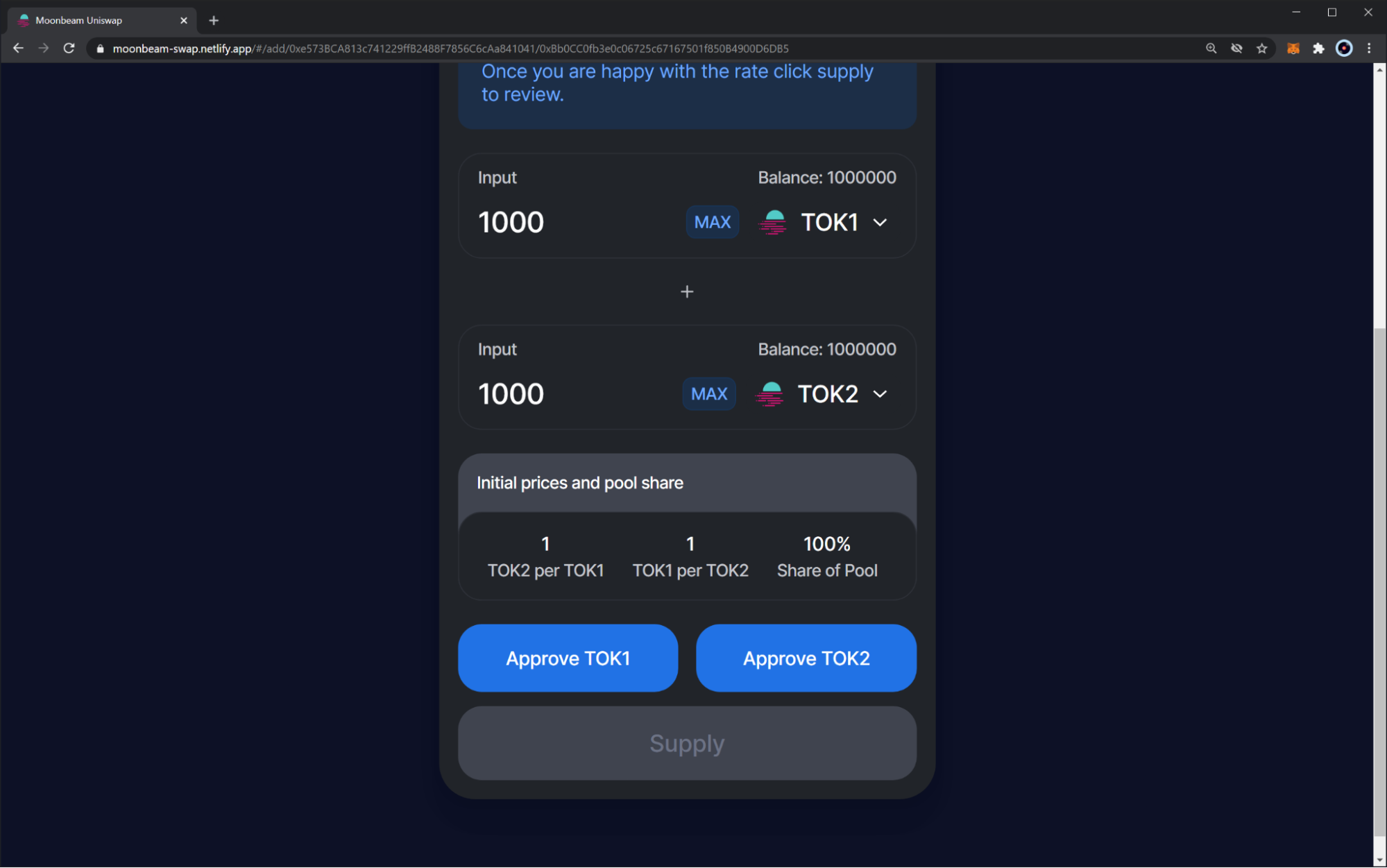 Once the approval is verified for both tokens, the “Supply” button should be enabled. Click that, confirm the details of your pool and select “Create Pool & Supply.” Sign the transaction with MetaMask. 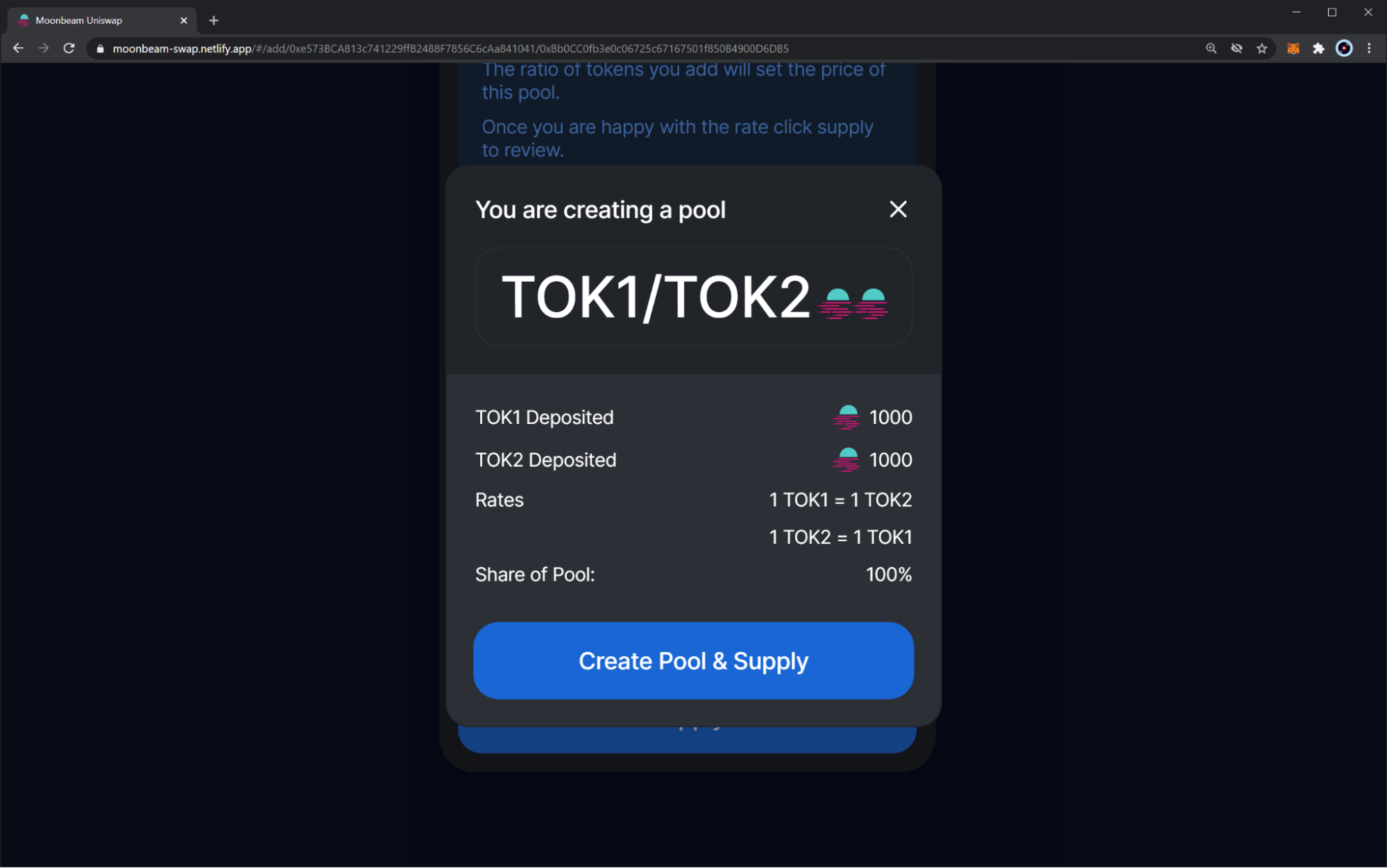 Once the transaction is confirmed, your pool should appear in the “Pools” tab. Clicking on it will outline all its details and will also display buttons to add or remove liquidity. If the pool is not showing up, refresh the site and/or wait for a minute before retrying again. You can also use the “import pool” option at the bottom of the “Pool” tab. 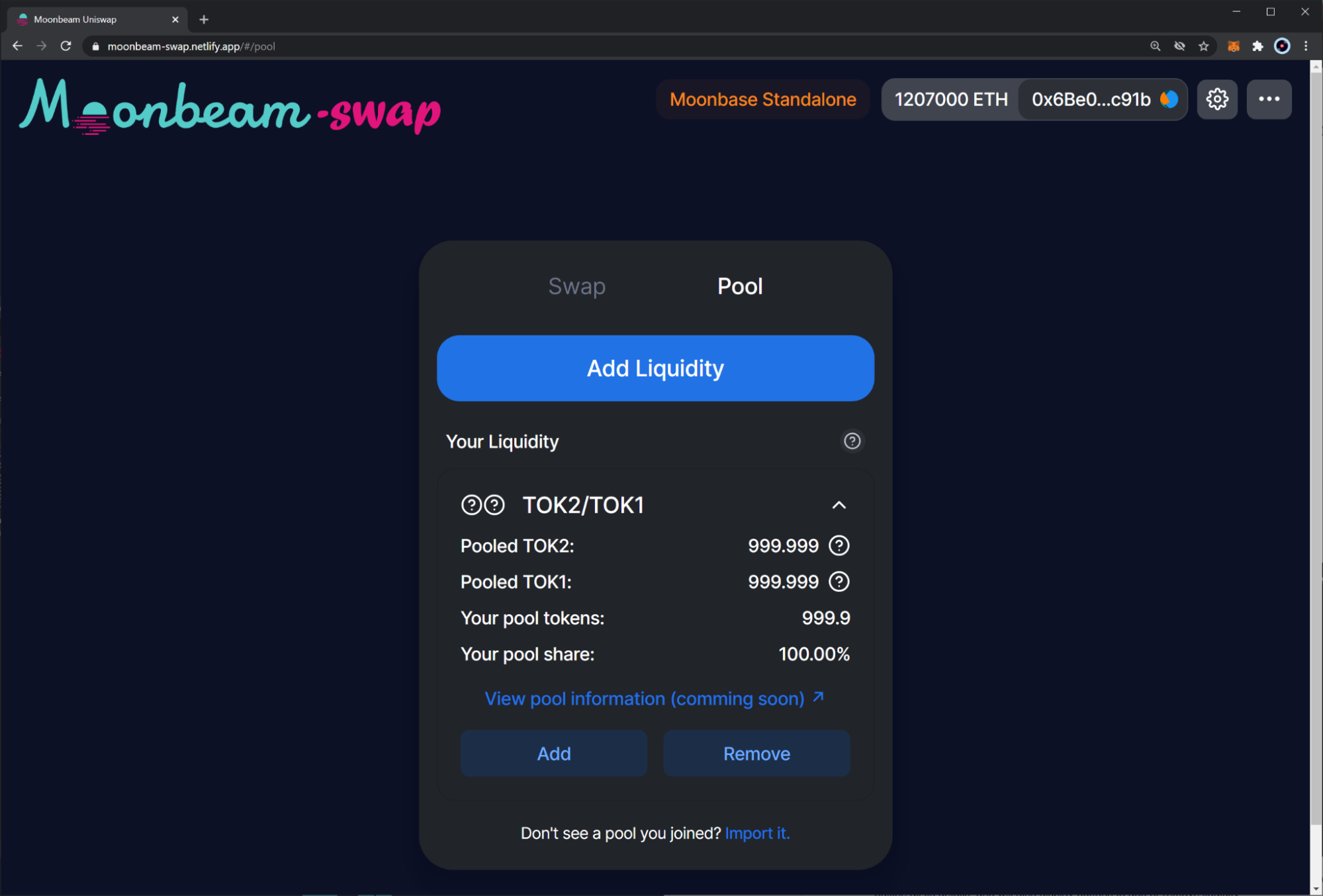 With the pool ready, you can start swapping tokens and play around with the interface.

These steps can be done as well in Moonbase Alpha. But first, remember to deploy your ERC20 tokens.