The runtime upgrade 1200 on Moonriver introduced a feature (called democracy precompile) that allows network participants to vote in on-chain governance using their MetaMask wallet. Moreover, Polkassembly, a platform/forum for anyone to discuss and participate in Substrate-based chain governance, was recently integrated with Moonriver.

Now, the combination of Polkassembly and the democracy precompile vastly reduces the friction for network participants to engage in on-chain decision making, as before, users needed to vote through Polkadot.js Apps.

This blog post aims to explain the concept of blockchain governance and democracy functions on Moonbeam, as well as provide a brief overview of Polkassembly. You can follow this guide to learn more about how to participate in Moonbeam governance using Polkassembly.

Since the creation of Bitcoin in 2008, its underlying technology — blockchain — has been experimented with, across a number of aspects. One of the aspects that has gained more attention is blockchain governance, and it has developed in two distinct directions: on-chain and off-chain governance models.

The difference between the two types of governance is the way the rules and procedures are implemented. In on-chain governance, the set of rules and principles are encoded into the blockchain directly and used by the participants to interact within the given infrastructure. Any changes to the blockchain are voted upon and implemented online via code updates and the entire process is automated. Consequently, the whole process is more transparent and decentralized. Whereas the off-chain type of governance relies on a single entity or a group of people that controls the blockchain and decision-making usually takes place offline, through forums, discussion boards, among others.

For the Moonbeam team, on-chain democracy features of Polkadot (and how they are implemented) were an important factor when deciding where to build the project. Its governance system allows network participants to take part in the democracy which provides network decentralization and ensures a higher level of transparency in decision-making. Although parachains can replicate the same mechanism in some form when building on Polkadot, it is up to an individual project to decide to what extent to benefit from the inherent decentralization features of the network.

Enabling democracy features on Moonriver ensures that owning tokens not only represents utility value in the token holder’s wallet but also the ability to have a vote in the management of the blockchain and have a say in the network upgrades to enhance blockchain performance. Below you will find more information on how Moonbeam governance works in practice.

Similar to Polkadot, GLMR token holders can propose changes to the Moonbeam network such as code upgrades, altering values to key parameters, and the governance system itself through a referendum.

Any token holder in the network can make a proposal regarding network management, including but not limited to: code upgrades, changes to the values for key parameters and even alterations to the governance system itself. Once a proposal is seconded (supported) by other network participants, it becomes a referendum and it is voted on a stake- and conviction-weighted basis. Conviction refers to the time period that token holders agree to lock their tokens when voting, and their weight depends on the duration of the lock. As such, the longer the conviction period for a given vote, the more impact it has on the outcome, as there is a higher economic buy-in. The minimum period to lock tokens is called “enactment period” which is the time between proposals being approved and put into action (enacted). Learn more about the main definitions of governance.

Before a proposal is enacted, it must go through various steps. The general flow of a proposal is the following (some simplifications were made): 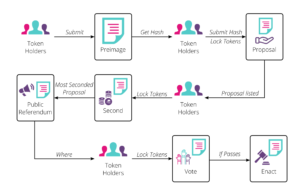 Even though democracy was enabled on Moonriver since launch, it was only accessible through Polkadot.js apps, which can present a hurdle from a UX perspective. This speaks to a bigger issue in blockchain governance: the reluctance of the network participants to engage in decision-making processes. Low voter turnout in on-chain governance is something that we have yet to tackle as an industry, and the first step in doing so is to make the process accessible to a user.

The runtime upgrade 1200 on Moonriver introduced the democracy precompile (runtime upgrade 1400 will introduce it to Moonbeam in the future). This allows DApp developers to leverage Moonbeam’s Ethereum API so that network participants can interact with democracy actions via popular wallets such as MetaMask. The wallet can be used to connect to Polkassembly, a governance explorer and discussion forum. It is a space for the entire community to engage in discussions and for token holders to vote on proposals introduced by network participants. 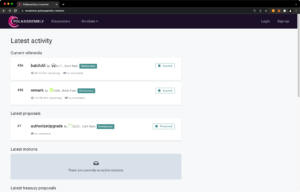 Polkassembly allows proposers to add additional context information that might not be apparent in the proposed action itself. For example, proposers can explain the motivation or consideration for a particular change, in addition to providing a more descriptive title. The voting experience is vastly improved, as token holders can view lock period times before voting and easily unlock their tokens with expired democracy locks from the settings page.

By enabling token holders to take part in a new mechanism such as governance with the help of a familiar tool as MetaMask, Moonbeam is able to eliminate potential obstacles to active participation. Thus, the initial interaction with the governance mechanism on Moonriver is expected to be seamless and engaging at the same time. This in return will ensure higher voter turnout and further decentralization of the network.

To participate in governance users can view the open referenda on Moonriver and on Moonbeam, add their comments, or connect their MetaMask to vote.