It’s been a year since Moonriver fully launched, which is when DApps could begin launching on the EVM (Ethereum Virtual Machine) and balance transfers were enabled. In that time, the network, and the Kusama ecosystem in general, have come a long way. Let’s take a look back at some of the achievements, milestones, and adventures along the way.

Moonriver is a smart contract platform on Kusama and serves as a companion network to Moonbeam. Unlike a TestNet, Moonriver’s original purpose was as a canary network: a long-lived experimentation environment with real-world value. It serves a similar purpose to historical canaries in coal mines by flagging any potential issues before the same codebase was deployed to Moonbeam. While TestNets often have incentive mechanisms added on top, CanaryNets have built-in value and incentives to help identify potential issues.

Moonriver was always intended to become a layer one blockchain in its own right, growing and changing with community demand. Since launch, it’s become home to nearly 200 projects and seen more than 20 million transactions processed on the network.

Moonriver paved the way to launch in mid-2021 after securing a Kusama parachain slot with 205,935 crowdloaned KSM. The network started producing blocks on June 29, 2021. Contributors around the world joined the Moonriver community to launch the smart contract platform, bringing unmatched Ethereum capability and EVM support to the Kusama ecosystem for the first time.

Notably, Moonriver’s crowdloan mechanics differed significantly from others at the time, particularly other parachains competing for the first five slots on Kusama. The Moonbeam Foundation took a “community-led” approach with Moonriver by dedicating 30% of the initial supply of MOVR network tokens to crowdloan participants, without rewards for investors and project founders. This community-led spirit continued post-launch as Moonriver grew to become a place for developers to create novel protocols and experiment with new concepts, whether the application will eventually be deployed on Moonbeam or not. While Moonbeam code is still deployed first to Moonriver, the network continues to thrive as an independent Kusama parachain with its projects and specialized use cases.

Moonriver started producing blocks in June 2021 and was fully launched shortly thereafter, on August 26th, 2021, with EVM, staking, and pallets activated and transfers enabled. This gave developers and users access to all of Moonriver’s capabilities. The first projects and ERC-20 tokens on Moonriver were launched nearly immediately, including a game from Seascape which was the first project to deploy.

In the fall of 2021, Moonscan went live, replacing Blockscout as the primary block explorer for Moonriver. Moonscan is an intuitive interface familiar to Etherscan users, adding to the simplicity of the Moonriver experience, but also adding powerful features like front-end interaction with verified contracts and token and NFT tracking.

By the end of the year, Chainlink price feeds were live, which now serve 34 assets with reliable price feed data.

In January, the first HRMP channel was opened to allow XCM communications between chains and the XC-20 standard was launched with the introduction of xcKSM. Today, there are 13 cross-chain channels on Moonriver, including over a dozen Substrate-based tokens that are deposited as XC-20s, which makes them able to interact with Ethereum-style applications on Moonriver.

When Moonriver neared its Kusama lease expiration in spring 2022, the Moonbeam Foundation secured a now self-funded slot and later the chain conducted a seamless switch over to the new parachain slot, maintaining uninterrupted block production.

In April, a runtime upgrade made XC-20s mintable and burnable. Mintable XC-20s, also known as local assets, are XC-20s that originate on Moonriver as opposed to being imported from a remote chain.

Teams Choose to Build and Live on Moonriver

Moonriver meets the needs of a diverse range of applications in the Kusama ecosystem with its active and unique community. This following list includes some of the most popular projects according to DAppRadar, but additional projects can be found on Downtown Moonbeam and DefiLlama.

These teams have chosen to use Moonriver in a wide variety of ways, not always with the intention of an eventual deployment to Moonbeam.

Some deployments like Damned Pirate Society, a pirate-based NFT project, are live on Moonriver and enjoy the active community and available tools like Pinata media storage, with no intention of a second deployment on Moonbeam.

Moonsama and Kanaria Skybreach Metaverse are NFT projects leveraging the power of XCM for cross-chain interactions using Moonriver. Moonsama’s NFT marketplace is connected to both Moonriver and Moonbeam wallets. The project unites NFTs across blockchains and metaverses, connecting both parachains, and soon, Ethereum. Kanarias are RMRK NFTs with a metaverse called Skybreach that lives on Moonriver.

Solarbeam, Zenlink, SushiSwap, Moonwell, and Multichain are all examples of projects that are deployed on both Moonriver and Moonbeam and maintain services on both parachains. Lido, Moonwell, and Beefy Finance also service both Kusama and Polkadot as part of the DeFi landscape.

In addition to experimentation around the code itself, Moonriver is used to pilot programs before they are launched on Moonbeam. This includes exploring use cases with new features and explorations with XCM across parachains.

XCM is a format for cross-consensus communication, or secure “messaging” between parachains, smart contracts, pallets, bridges, and shared enclaves. It was created by Parity for use across all blockchains. Moonriver has been active when it comes to interoperability, with 13 open HRMP channels connecting the network to the Kusama Relay Chain and other parachains, bringing 16 new tokens from the Kusama ecosystem into the Moonriver platform. 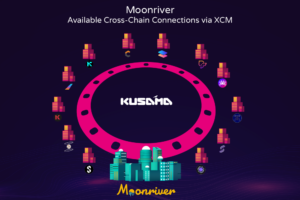 XCM was tested and used on Moonriver first, and integration gives teams simple and direct access to all the tools and resources they need to build DApps and connect them to the other parachains on Kusama. These integrations allow native tokens from the parachains to be deposited on Moonriver to become XC-20s for use in Moonriver DApps, and let the MOVR token be used on the parachains. As interoperability is further developed and explored, these cross-chain connections lay the groundwork for the use case of specialized chains working together seamlessly.

This year also included the implementation of the Orbiters program, a Moonbeam Foundation-designed entry point for independent infrastructure providers to participate in collation for the Moonriver network. The program helps bring a variety of new and experienced collators into the process, helping to produce blocks and maintain the liveness of the network. Modeled on the Kusama and Polkadot validators program, Orbiters on Moonriver aim to keep the community strong and support network infrastructure decentralization.